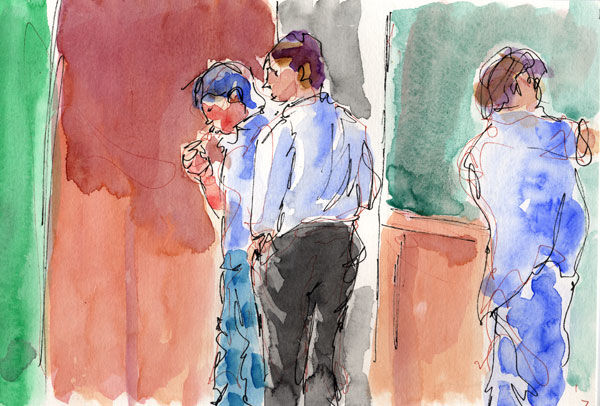 It's always good to have a project which makes you work
11/11/2012
As I’ve said before, I like to allow chance to play a part in my work. Send me out to draw a landscape and I will not find anything I want to draw. Select a random point on the map and tell me to produce a work there and I won’t have any problem. And chance in other ways - I enjoy the serendipity of coincidence…

Recently in a moment of curiosity I was looking at the London taxi drivers’ ‘knowledge’. In order to get a licence as a black cab driver, you have to learn 320 ‘runs’ around central London and 30,000 ‘points’ or places of interest. Anyway, I discovered that run 275 goes from Trafalgar Avenue/Sumner Road in Peckham to the Gipsy Hill Tavern; in other words it starts just outside my studio.

I probably would have forgotten this except a couple of days later Acme Studios announced they were holding a competition for their tenants to celebrate their fortieth anniversary. The brief is to produce an artwork that can be displayed on their website that reflects the work that Acme do as a studio provider. With thoughts of the network of ‘runs’ in my mind and the knowledge that one at least connected with my studio, I thought of a network connecting each of their London studios. I could then use that network as the chance element in my entry.

I quickly decided to ditch using the taxi drivers’ runs because although I could find a list of them, as I could not find them mapped, I had no easy way of working out how a taxi driver would get from one studio to another. I therefore plotted direct lines between the various studios on Google Maps.

My original intention was to follow these lines on the ground and to produce sketches at points along them. I soon realised that this would not be altogether practical and decided instead to walk from one studio to another by as direct a route as possible. Along the way I take dozens of photographs and work from these back in the studio. What I end up with tends to be sketches of people rather than views.

From these sketches I’ve made a computer slideshow because my interest is in producing a series of works rather than one representative work (also making it a slideshow stops people from noticing how sketchy my sketches are!) My only headache is to produce a slideshow on a small enough file to email while demonstrating what I have in mind.

Finally I’m left with the big problem – how to relate the slideshow to the work done by Acme. Although my whole project is in its way conceptual, I’ve never found conceptual too easy to do. Take a deep breath…

Art and artists belong in the community, and having artists in a particular place will in time change that place and, if only in a small way, the lives of the people who live there. To celebrate the work done by Acme in providing spaces for artists to work, I have imagined a network connecting each of their studios to the others and have recorded scenes on a series of walks along this network.