I run a life drawing group in Croydon, South London. Established in 1987, we celebrated our thirtieth anniversary in 2017.

We meet at East Croydon United Reform Church, Addiscombe Grove, Croydon, CR0 5LP, normally on the second and fourth Saturday morning of each month (apart from over the summer where the sessions are at 3 week intervals and December when we only have one session) – see the News page for the exact dates.

£12.00 (£6.00 for students). It is a drop-in group, you pay per session and there is no membership or joining fee. The sessions are non-tutorial – although I am happy to offer advice to anyone who asks. We usually start with an hour of short poses, followed by a longer pose for the rest of the morning.

I supply drawing boards and easels, but you need to bring your own materials. The church is convenient for public transport (2 minutes East Croydon station) and there is ample free parking.

Please see the Frequently asked Questions, email me or use the contact me form if you want further information. If you want I can put you on my mailing list and send you reminders before each session.

A note for models - You too could be a model! If you're interested in modelling for me, please see this page where I have put down some thoughts about modelling and included a number of pictures to show that modelling isn't only for the young and good looking. If you do want to model for me, please email me or use the contact me form. A word of warning - there are times when I have a backlog of models to book, so I may not be able to offer you any work in the near future; on the other hand you may be lucky and get in touch when I can't find a model for my next session.

A Brief History of the Croydon Life Drawing Group

Back in the 1980s Laurie Rabson ran an Adult Education Life Class at the old Heath Clark School in Waddon (now demolished and replaced by a housing development). There were never any poses longer than 20 minutes which some of the artists found constricting, so in 1987 Joel Arnstein decided to start an independent Saturday morning life drawing group. Generally speaking we had the same model and pose for 2 weeks giving people the opportunity to paint or produce finished drawings. 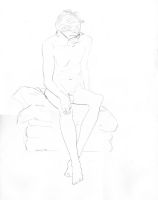 I wasn't in right at the start - I first went at the beginning of 1988. At that time I was producing highly finished pencil drawings, such as this one of Chris – you can see why this suited me better than 20 minute poses. (These days I’ve neither the eyesight nor the patience to do work like this).

You would not believe how much easier RAM (the Register of Artists Models) and the advances in communications have made finding models for a suburban London group. In the early days we had only 4 regular models. So we would occasionally have a portrait session such as the one where I made this drawing of Georgina. 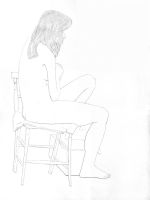 In the early days we met in a room in the Attic Arts Centre over the indoor market in Park Street opposite where Turtles used to be. The building has since been demolished and replaced by a bar that seems to close every couple of years only to open again in a new guise.

One of our regular models in the early days was Pat, who sadly died a few years later. Although this drawing shows her necklaces and bracelets, it does not show her other trademark - years of working in dirty studios and art rooms had led her to keep her shoes on while she was modelling.

To complete the roster of our early models a drawing of Stan, who worked as a baggage handler at Gatwick Airport and rode around (somewhat unsteadily) on a moped.

After a couple of years Attic Arts moved to a couple of rooms over commercial premises in Wandle Road (another building that's been demolished – for a long time it was a carpark, but now flats have been built on the site). I know this drawing of Vijay was done at Wandle Road because he's leaning against the pillar that was in the middle of the room.

When Croydon Council developed the Clocktower complex, they put all their arts funding eggs into the one basket. With no more money from the Council, Attic Arts folded and we had to move. Luckily we found our present home at East Croydon URC.

As the 90s went on, we were able to attract a wider variety of models. This was a Brazilian model with lovely honey-coloured skin (which of course I failed to do justice to) ... 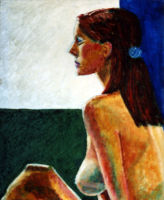 … and this is Tanya, a talented Russian sculptor who was studying at Croydon College.

As Joel was leaving the Croydon area, I took over running the group from the start of 2000 - which is when I drew this sketch of John Callaghan in a typical pose.

Over the years there were fewer and fewer artists who wanted to take advantage of having the same model and pose for two consecutive weeks. We switched to having the same model for two weeks with a different pose in the second week unless someone had a work they wanted to go on with and then in 2003 (when I produced this drawing of Marcus) to having different models each week.

It was not until 2006 that I realised that it made sense to have a summer break when attendances were low - I didn't have to find someone to cover if I went away. This drawing of Jeanette doesn't really have anything to do with summer breaks, but it was done in 2006!

We had met every week, but by 2010 I realised that there was not sufficient demand for weekly sessions, so switched to twice a month. (I don't receive any funding for the group - while not looking to make a profit, I don't want to end up subsidising the artists who do attend.) I'm pleased to say that since this change the numbers have been healthy (and I get some free Saturdays!) The picture is a quick sketch of Penny.

There are galleries showing more of the pictures I have produced at the life drawing group here and here.
Next
Previous